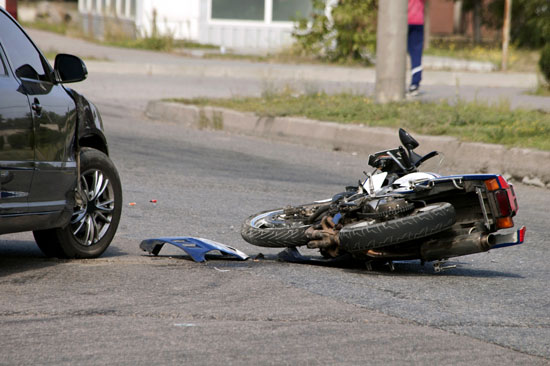 Victims of motorcycle accidents need unique qualifications, protection, and guidance of an expert motorcycle crash litigator. Cherepinskiy Law Firm is the motorcycle accident lawyer Los Angeles residents can rely on for justice! This firm has the expertise, thorough understanding of the applicable laws, best-qualified experts, and resources to handle the most complex cases.

As Los Angeles becomes more and more congested and crowded, motorcycles gain more popularity as the mode of transportation that allows riders to spend less money on gas and get to destinations faster despite heavy traffic. However, negligent drivers and road hazards expose motorcyclists to the increased risk of getting involved in a motorcycle crash that can result in catastrophic injuries or death. Multiple drivers in Los Angeles and throughout California do not know how to share the road with motorcyclists. These drivers frequently make bad decisions, which lead to tragic consequences.

While modern automobiles have a multitude of continuously-evolving safety features, motorcyclists have virtually no protection besides their personal safety gear (helmets, protective clothing, gloves, and boots). Motorcycle safety gear can be effective in case of a minor skid or fall, but it will do little to protect the rider in case of an impact with a car, van, truck or bus. For multiple bikers, riding their motorcycle is much more than just commuting from point A to point B. The motorcycle gives them freedom and a sense of adventure. It is a major part of their life. However, a motorcycle accident can suddenly take that freedom and adventure away, leaving the victim with severe injuries, constant and excruciating pain, and piling medical bills.

If you make a decision to proceed with a legal action, the Los Angeles motorcycle accident attorney at Cherepinskiy Law Firm will provide competent, aggressive, as well as caring and compassionate representation. This firm pursues justice on behalf of motorcycle accident victims with passionate dedication. Cherepinskiy Law Firm provides legal services throughout Southern California and will work tirelessly in order to obtain the maximum compensation.

Motorcyclist Fatalities in the United States

Based on the statistical data from the NHTSA, in 2016:

Motorcycles Do Not Offer the Same Protection as Automobiles 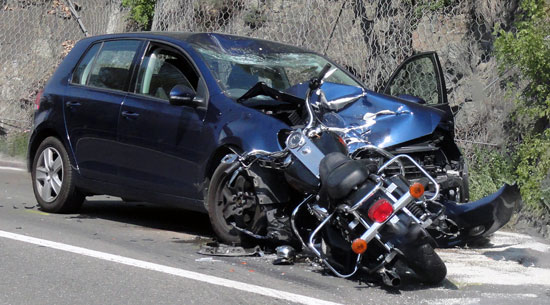 Modern automobiles offer a variety of safety features, which range from seat belts to airbags. In addition, the body of an automobile serves as a protective “cocoon” for drivers and passengers. Motorcycles do not offer any of these protections. Due to their very design, in case of an accident, motorcycles make their riders and passengers much more vulnerable and likely to sustain serious injuries than drivers and passengers of virtually any other motor vehicle. The following are some of the factors, which predispose motorcyclists to suffer severe injuries or fatalities:

If bike riders cannot be protected by motorcycles themselves, if they get in a crash, they need the assistance of the motorcycle accident lawyer Los Angeles residents believe in.

A motorcycle accident may lead to very serious and catastrophic injuries, as well as a fatality. The following is the listing of the most common injuries that can be caused by a motorcycle crash:

If you or a loved on suffered an injury as a result of a motorcycle crash, you need the assistance of a motorcycle accident attorney Los Angeles residents can turn to for legal help.

Cruisers are motorcycles, which maintain the main appearance elements, style, and design features of classic American motorcycles built during period from the 1930’s to 1960’s. These bikes are reminiscent of the classic Indian and Harley-Davidson machines. The seating position is typically upright with the high handlebar placement.

More powerful cruisers are called “power cruisers”, and they typically have a modern appearance and come equipped with stronger brakes and softer suspensions. Well-equipped power cruisers are essentially touring motorcycles.

Choppers originated in California. The first motorcycles of this type were built in the late 1950’s. Initially, these motorcycles were created by cutting and modifying (“chopping”) stock motorcycles. Modern choppers can be built from scratch. There are multiple companies that offer various chopper kits and contain all parts necessary to build a motorcycle – from frames and bodies, to engines, wheels, brakes, seats, handlebars, and all other components. There are also various enthusiasts and professional bike shops, which specialize in creating unique and beautiful choppers.

Classic choppers have an unmistakable stretched-out appearance. The “chopper look” is achieved by placing extremely long forks (telescopic shock-absorbing tubes for the front wheel) at increased rake angles. Other typical features of a custom chopper are as follows:

The following are features common to virtually all sport bikes:

There is a sub-category of sport bikes, which is called “naked bikes” or “streetfighters”. These motorcycles have significantly reduced or even absent bodywork and fairings, as well as higher handlebars that allow riders to sit in a relatively upright position.

Sport touring motorcycles represent the hybrid of a sport bike and a touring motorcycle. For example, these motorcycles have multiple characteristics of sport bikes, such as light frames, powerful engines and aerodynamic bodies. At the same time, they offer features typical for touring bikes – e.g. luggage compartments and a more comfortable seating position.

These motorcycles are designed for off-road competitions and recreational activities.

Although all dirt bikes may have a somewhat similar appearance, they are not all “the same”. Depending on the specific sport or activity dirt bikes are designed for, they can be equipped with a wide variety of different engines, gearboxes, suspensions and other items of equipment.

In California, many dirt bikes are not “street-legal” and cannot be registered. Nevertheless, dirt bikes that are compliant with the requirements set by the California Air Resources Board (CARB), such as some dual-sport bikes, can be registered and operated on public streets and highways.

Scooters are small bikes, which are equipped with 50cc to 250cc engines offering a very modest power output.

Most scooters are equipped with low step-through frames, platforms for feet, as well as various shields protecting riders from greasy engine-related parts and components. One of the major differences between motorcycles and scooters is the gearbox. Motorcycles have purely manual sequential gearboxes with wet clutches. With the exception of some vintage scooter models, the majority of scooters feature “automatic” gearboxes, which are technically called “continuously variable transmission (CVT)”.

Since motorcycles are not nearly as stable as motor vehicles with four or more wheels, even relatively minor road hazards – such as wet asphalt, loose gravel, or potholes – can result in a motorcycle crash with tragic consequences. As the following examples show, many motorcycle crashes are the result of another driver’s carelessness:

The motorcycle safety laws are very complex, and you need the services of the motorcycle accident lawyer Los Angeles can trust to know these regulations well.

In California, motorcycle operators must comply with the following minimum liability insurance requirements:

In case of a motorcycle accident, the failure to comply with these minimum insurance requirements may subject a motorcycle driver to the suspension of his or her driver’s license. In addition, if a motorcyclist cannot provide proof of insurance during a routine traffic stop, the motorcycle may be impounded and the driver may have to pay a fine.

Watch Out for Cars Turning Left at Intersections

Never Ride Under the Influence of Alcohol

Visibility is one of the toughest challenges for motorcyclists because of the motorcycles’ small size compared to other vehicles, as well as blind spots and drivers’ inattention. Follow these steps to minimize your risks:

Watch Out for Road Hazards

Always be on the lookout for road hazards, which include but are not limited to, the following:

Use Rearview Side Mirrors

Be Extremely Cautious When Lane Splitting

In California, lane splitting is legal. It can be very tempting to ride between cars in order to save time, especially during rush hour traffic. Nevertheless, this practice can lead to tragic consequences:

Therefore, the safest way to deal with lane splitting is to – avoid it completely! However, if you do decide to lane split, follow the safety tips issued in 2018 by the California Highway Patrol (CHP):

Protect Yourself from Rear-End Collisions at Intersections

When a motorcycle is stopped at a red light, it runs the risk of getting rear-ended. In order to minimize this risk, use the following approaches while you are waiting at intersections:

Do Not Enter Corners and Turns at High Speed

High speeds make it extremely difficult to navigate tight or sharp turns. If your speed is too high for a particular curve, you may fall or even fly off the roadway. You do not know what is waiting for your behind that sharp curve. If your front wheel unexpectedly gets into a water puddle or gravel, in a split second, your motorcycle will be on the ground.

Make Sure You Know How to Operate Brakes Properly

Whenever you ride your motorcycle, wear safety gear. The most important component of safety gear is – a helmet. Motorcycle helmets save lives! Safety gear items include, but are not limited to, the following:

Always make sure your motorcycle is regularly maintained:

Never delay getting your bike diagnosed and repaired. Whenever you hear a weird noise or feel that brakes, throttle or steering controls are not operating properly, it can be a sign of an impending component failure. Have your motorcycle inspected by a mechanic right away! If you procrastinate, you may end up in a crash.

What Damages Can be Recovered in Motorcycle Accident Cases?

Victims of motorcycle accidents can claim the following two main types of damages: Non-Economic and Economic damages. In some situations, those who have been injured in a motorcycle crash may potentially seek Punitive Damages. For cases involving future care, the Los Angeles motorcycle accident lawyer at Cherepinskiy Law Firm retains top expert physicians, life care planners, and economists to evaluate clients’ needs and present the best case on their behalf. A detailed discussion of the recoverable damages is included on the Personal Injury Damages page of this website.

If a motorcycle accident resulted in the death of a loved one, then compensation can be sought in a Wrongful Death action.

The value of any motorcycle accident claim depends, in part, on what you do immediately after the accident and subsequent to that. Your decisions and actions can seriously impact your claim and the amount of your potential recovery. Read this firm’s discussion of Twelve Steps to Take After a Motor Vehicle Accident to learn about post-accident safety, obtaining and preserving evidence, dealing with insurance companies, and other useful tips.

If you believe your injuries or a loved one’s death occurred as a result of a motorcycle crash, please call or fill out an electronic contact form today to request a free consultation. Cherepinskiy Law Firm, as the Los Angeles motorcycle accident lawyer, will work in a tireless and compassionate manner in a personal injury or a wrongful death case to make sure you are compensated for your injuries and losses.