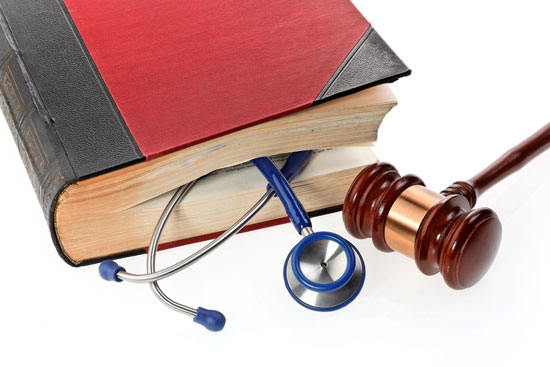 As the Los Angeles medical malpractice attorney who is among the top lawyers in this field, Cherepinskiy Law Firm will zealously apply all of its significant expertise, skills, and devotion to achieve the best outcome for you. The firm’s principal, Dmitriy Cherepinskiy, brings over a decade of experience as a defense lawyer on behalf of health care providers, including doctors, nurses and hospitals. Simply put, Dmitriy spent many years defending medical professionals in complex medical malpractice cases – he knows all their weaknesses …

Medical malpractice means professional negligence by any practitioner in the medical field. A doctor or another health care provider is negligent if he or she breaches the standard of care, and that breach causes an injury or death of a patient. Specific standards of care apply to various medical practitioners depending on their specialty. California law defines the “standard of care” as the level of skill, knowledge, and care in diagnosis and treatment that other reasonably careful [a particular type of a medical specialist, depending on a case] would use in similar circumstances. California Civil Jury Instructions (CACI) No. 502 – Standard of Care for Medical Specialists.

If a medical provider’s negligence resulted in an injury or death of a loved one, a Los Angeles medical malpractice lawyer at Cherepinskiy Law Firm will work hard to help you recover compensation. This firm prides itself on its meticulous trial preparation, and it works with the best qualified medical experts who assist with the process of evaluating, investigating, and proving your claim.

As an experienced medical malpractice attorney in Los Angeles, Cherepinskiy Law Firm understands that doctors and other healthcare providers do not want to commit errors. Yet, medical malpractice occurs with an alarming frequency, and leads to devastating results. The statistical data is staggering:

Examples of medical malpractice include, but are not limited to, the following:

Each of these types of medical malpractice is discussed in detail below.

When anesthesia is not properly administered or the patient is not adequately monitored, the consequences can be catastrophic and deadly. Common examples of anesthesia malpractice include the following:

Birth injuries caused by medical malpractice have the potential to cause devastating lifelong disabilities and permanently change the lives or newborns and their families. For a detailed discussion of these devastating injuries, please visit the birth injuries page.

Delay in Diagnosis and Failure to Diagnose Cancer and Other Conditions

A failure to diagnose or a misdiagnosis of cancer and other serious diseases can have a profound effect on a patient’s life, ranging from permanent injuries to death. As one of the best medical malpractice lawyers in Los Angeles, Cherepinskiy Law Firm is ready to analyze your case to determine if there was a breach of the standard of care. This firm has the skills to handle cases involving the failure to diagnose or a misdiagnosis of the following illnesses:

This firm, as Los Angeles medical malpractice attorney, handles various matters involving malpractice on the part of emergency room physicians and hospital personnel. Emergency room triage nurses are trained to perform quick assessments of presenting patients in order to determine the level of necessary medical assistance depending on the acuity of the situation. Emergency physicians’ role is to evaluate, provide prompt care, and stabilize patients who are critically ill due to an injury or an illness. Medical malpractice on the part of emergency room doctors and nursing staff can cause delays in diagnosis and treatment with disastrous consequences ranging from severe injuries to death.

Gynecological surgeries have certain associated risks. However, many of these risks and adverse consequences can be avoided by practicing within the standard of care. Medical errors during gynecologic operations, as well as during the pre-operative and post-operative period, can result in severe injuries such as: perforation of organs, infections, and bleeding (hemorrhage). These are some common gynecologic procedures, which can involve malpractice:

As an entity, a hospital itself obviously cannot commit negligence. Hospitals are liable for the negligent acts and omissions of their agents or employees. In other words, hospital negligence refers to the medical malpractice by hospital’s employees and agents, including physicians, physician assistants (PA’s), nurses of all types – registered nurses (RN’s), licensed vocational nurses (LVN’s), and certified nursing assistants (CNA’s), as well as various technicians, staff members., administrative personnel.

In the United States, hospitals are certified and credentialed by the Joint Commission on Accreditation of Healthcare Organizations (“JCAHO”) and must comply with multiple Federal and State regulations. In addition, hospitals are required to maintain and regularly update internal Policies & Procedures in order to promote compliance with regulations, accreditation requirements, and standards of practice.

Hospital negligence can cause serious injuries or death and it includes the following common types of malpractice:

As a former defense attorney who represented hospitals in multiple cases, Dmitriy Cherepinskiy of Cherepinskiy Law Firm is the medical malpractice lawyer in Los Angeles who is highly skilled. This firm has the expertise to investigate and pursue hospital malpractice matters.

For years and years, medications have been playing a huge role in healthcare. For example, Penicillin (which had been discovered in 1928 by Scottish researcher, Sir Alexander Fleming) reduced the number of fatalities and amputations among soldiers during World War II. Other modern medications help patients with controlling various chronic illnesses such as diabetes. However, when doctors or nurses make medication errors, it can lead to serious adverse effects or even fatal outcomes. The following are some typical examples of medical malpractice involving medications:

Neurology is the branch of medicine, which involves care and treatment of the nervous system disorders caused by trauma as well as chronic and acute illnesses. A neurologist can be negligent if he or she fails to recognize signs and symptoms of severe and potentially life-threatening conditions such as:

Psychiatrists are medical doctors who have the right to prescribe medications. Unlike psychiatrists, psychologists are not physicians, and they are not authorized to issue medication prescriptions. Psychiatrists’ ability to issue prescriptions, however, can lead to malpractice. For example, they can breach the standard of care and negligently issue inappropriate prescriptions for antipsychotic and psychotherapeutic medications, resulting in addiction and subsequent injuries or even death. In their effort to obtain anti-depressants or stimulants, drug-seeking patients frequently feign psychological issues and disorders such as anxiety, depression, insomnia, and fatigue. Psychiatrists must be able to “see through” this kind of behavior and refuse to issue inappropriate prescriptions.

Based on the statistical and National survey data from the U.S. Department of Health and Human Services (HHS):

Opioid medications are highly addictive. In the United States, the growing pattern of abuse of prescribed controlled substances — especially opioid pain medications — constitutes a serious public health concern. Modern researchers and commentators have called this problem the “Opioid Crisis” and the “Opioid Epidemic.” The most prevalent misuse of opioid drugs is in the field of pain management, because issuing prescriptions for opioid painkillers is very common and widespread in this field of medicine.

Those healthcare providers (physicians and physician assistants) who manage acute and chronic pain with opioid drugs, have a duty to watch for patients’ drug-seeking behavior and opioid abuse / misuse. Failure to comply with this standard of care, and negligent prescribing of opioid pain medications can result in the start of an addiction, worsening of addiction, and subsequent severe injuries or even death.

Pursuant to California Health & Safety Code section 11165, the California Department of Justice maintains Controlled Substance Utilization Review and Evaluation System (CURES), which is a database that stores Schedule II, III, and IV controlled substance prescription information reported as “dispensed” in California. Effective July 1, 2016, all California-licensed prescribers with DEA numbers must be registered to access CURES. Starting on October 2, 2018, physicians and physician assistants are mandated to run a CURES report before they take any of the following actions with respect to any controlled substance:

Patients have the right to receive the prescribed medications in the correct dosage, and with appropriate instructions and warnings. Unfortunately, with an alarming frequency, pharmacies breach the standard of care in dispensing medications. The incidence of pharmacy malpractice is rising. Pharmacists experience the pressure to perform their duties quickly while being overburdened with the number of prescribed medications. These are some of the common prescription errors, which can cause serious injuries or even fatal outcomes:

When a pharmacy suspects that a patient is a drug-seeker, the DEA recommends to never “take their word for it” and never dispense drugs in order to simply get rid of drug-seeking patients.

A radiation overdose can increase a patient’s risk for long-term health issues, including an increased risk of cancer, benign tumors, and genetic disorders. However, some medical devices have recently exposed patients to excessive doses of radiation.

In October of 2009, after a series of radiation overdoses that 260 patients received at Cedars-Sinai Medical Center, the U.S. Food and Drug Administration (FDA) issued several recommendations intended to address CT scan problems. The FDA investigation demonstrated that, during brain perfusion scan procedures, multiple patients at Cedars-Sinai Medical Center received excessive doses of radiation – up to eight times the regular dosage of radiation associated with CT scanning. The FDA concluded that the overexposures were due to operator error and recommended adequate technician training. The FDA also recommended that CT scan manufacturers install displays showing radiation dosage settings, as well as submit radiation dosage information to patients’ medical record for tracking purposes.

Radiologic imaging is a very powerful modality in diagnosis and treatment of multiple serious diseases. A radiologist’s failure to detect apparent abnormalities can cause a failure to diagnose and timely treat the following:

In a publication entitled “Malpractice Issues in Radiology,” radiologist Leonard Berlin referred to several published reports, which demonstrate that the approximate rate of interpretation error among radiologists is 30%. Among these interpretation errors, based on another study, approximately 80% are errors involving perception – i.e. the imaging study (x-ray, CT scan, MRI, etc.) demonstrates an abnormality, but the radiologist does not detect it. Additionally, a radiologist’s failure to communicate significant findings to a clinician can lead to dangerous consequences.

When a radiologist’s unreasonable failure to detect or communicate a significant and potentially dangerous finding causes a delay in the diagnosis or treatment of a serious illness or leads to a patient’s death, a medical malpractice lawsuit can be initiated. You will need the expertise of a skilled Los Angeles medical malpractice attorney to seek compensation from the responsible party.

Every surgery has certain risks associated with it. However, if surgeons comply with the standard of care, many of these risks can be alleviated or avoided. The common examples of surgical malpractice are as follows:

What Damages Can be Recovered in Medical Malpractice Cases?

Victims of medical malpractice can claim the following two main types of damages: Non-Economic and Economic damages. In some situations, those who have been injured by a healthcare provider may potentially seek Punitive Damages. For cases involving future care, the Los Angeles medical malpractice lawyer at Cherepinskiy Law Firm retains top expert physicians, life care planners, and economists to evaluate clients’ needs and present the best case on their behalf. A detailed discussion of the recoverable damages is included on the Personal Injury Damages page of this website.

If you believe a doctor, nurse, or another healthcare provider caused your injuries or a loved one’s death, please call or fill out an electronic contact form today to request a free consultation. Cherepinskiy Law Firm is the medical malpractice attorney Los Angeles residents can count on when they have been wronged by healthcare providers. This firm will work in a tireless and compassionate manner in a medical malpractice or a wrongful death case to make sure you are compensated for your injuries and losses. 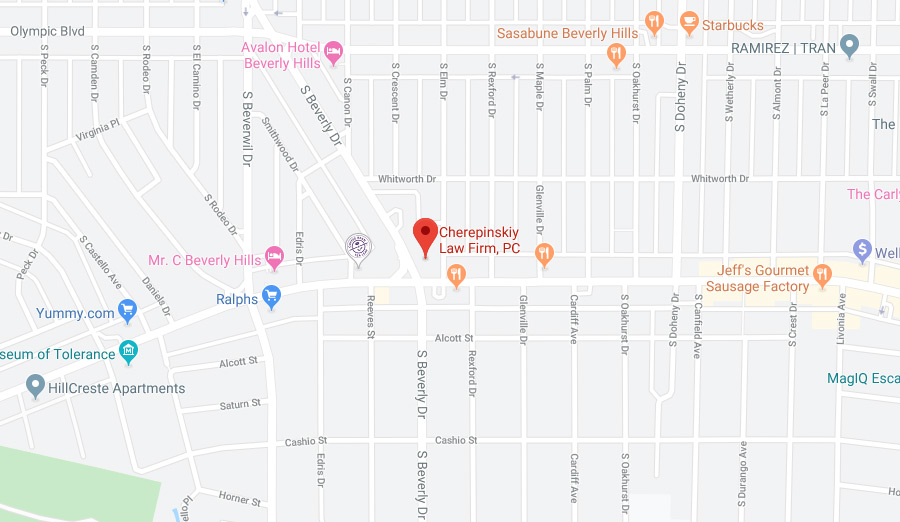